All articles tagged with "Head"

Watch me trampling this looser on the flour. I wear my sexy wedge heeled sandals and stand on his belly… first… then I’m going to take care of his mask- covered head. I begin to put one of my wooden heels in his face and then step with both feet on his heads. I want him to turn his head so I can do the other side as well. I know my wooden wedge heels hurt him a lot… but I don’t care!

I’m Emily and this is my friend Mistress Gia. We are looking forward to bother our skinny slave girl. We will definitely take turns in standing on her head for a while, to pressure her little head with all our weight. I and my friend love the feeling of her facial skin under our rough and smelly bare feet and her skin in between our toes. Lt’s see how much pressure this little biatch can handle!? ;)

This guy really annoyed me by telling me a thousand times how much he adores my feet and sneakers. Well, I will show him how nice they are from below! I use a little drug to make him paralyzed. Now he can’t move as I step on his head firstly with my beloved sneakers and then only with my sweaty bare feet. I guess this guy won’t annoy me ever again!

This clip shows Mistress Bonnie FACEBUSTING her footslave with her adorable bare feet. Intentionally for this trampling session she varnished her toenails in dark blue. She steps on the ugly heads and face and starts crushing and trampling it with her whole body weight. She digs her toes in his face skin, also hurting his eyes and the rest of the face. 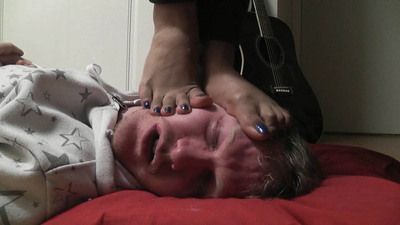 Two slaves have to lie down next to each other to give their two Mistresses, Athena and Samanta, the possibility to walk from one to the other. The girls don’t just walk on any part of their slaves’ body, but step on one of the most sensitive parts of the human body – their heads and throats - not being aware of stepping on the slaves temples or voicebox. The slaves are having a hard time panting for breath.

My Sneakers in your Face !

Today is a good day, decides Mistress Rebecca, to try how suitable her new sneakers are, to do some face trampling. It turns out her shiny black and white sneakers are just perfect to be placed in the face of her slave. She can easily lift one foot of cause while standing on her slaves face. But she can also place both shoes next to each other in his visage. She really likes to repeats that a couple of times!

Athena and Dafne really love their feet! And their feet are truly beautiful! But there is one additional thing to further improve their prettiness - some hot stockings! They wear black and white stockings with a funny pattern. And they want to use them to torture their stupid slave Gommolo too! He lies on the ground and they start to trample his body! They walk at his head and throat so he cannot breathe anymore. How long can he stay it...?

Eileen and Milla trample him together

The slave will be trampled today. There is no special reason. But Eileen and Milla waited too long since the last time and so they don't want to waste any more time. The eyes of the slave are bound and he cannot see what will happen. But this is not necessary - he can concentrate on the pain at his chest and head - because the two sexy ladies trample him with their full weight...!

Miss Melanie is a ultra violent girl! So this clip! The fat guy lies on the ground and she starts to treat him... she steps on his back and digs her heels into his chubby skin. You can see a sign of every step on him. But there is lot of more space at him to punish! So she also tramples his head. I'm not sure if the slave had a headache after this session or maybe something even more painful...!

The Sado Sisters and a poor slave's face

The Sado Sisters are back and like to show how cruel they are! The slave thought that he has survived the worst thing when they took out their shoes - but then he had to realize that the real pain begins now! Their socks and feet smells sooo bad but there is no escape. They stand on his head and he has to smell the whole sweat. They show no mercy and even try to punish him a little bit more - while standing at his head together at the same time!