Princess Jenny wants to condition her slave until he's totally obedient to nobody else but her! She chose him as her new slave, and she shows him what this means in feelings: she walks over his body, while his upper body part remains undressed, and digs her sharp heels into every little inch on his skin that hurts the most. She also pays enough attention to his face, which she squeezes under her cruel high heels and jumps on him without mercy!

Marissa needs some more high heels - for trampling obviously - and is there any better way to try out shoes than directly on a slave's body?! She walks her slave on a leash into the store, grabs a few pairs of high heels she likes and then just tramples him - right there in the store - with every pair she might like! He has to endure his mistress' weight and feel the sharp heels of her shoes dig deep into his skin. He's obviously in a lot of pain - and humiliated on top of it! Used as a human carpet in public - where the sales person and every customer can see that he's nothing but a slave!

Mistress Megan is a cruel mistress. She hates losers and when one of the people in her team is deemed a loser, he or she has a problem with her. She either chases the loser away or she punishes him in an effort to get him to stop being a loser. That is what she did to this slave when she trampled him painfully in order to make him stop being a loser.

Mistress Emily only knows one way to punish a slave. And that is to trample him or her. When her slave messed up, she knew exactly what she was going to do and she did it. She trampled his face with her bare feet and let full weight come to bear on his face. She wanted the pain to be a lesson that he is never to do that again. If he does, the pain will be doubled.

Guys pretends to like trampling to hang out with mistresses

When this guy realized that the girls she had been stalking were dominas, he went to them and told her how he loved to be dominated. He wanted to be with them physically instead of having to stalk them. He thought it was easy but shit was painful! The trampled him all over his body and did it at the same time. But he had sad he loved it so he couldn't tell them to go easy on him.

Mistress Kitty had not trampled a slave in a long time. So she wanted to horn her skills so that she could get even better at it. She went and searched for a slave and when she found the slave, she used all her skills on him and even invented some. She was super excited about it but he was not. That is because he was feeling all the pain and she was feeling all the fun.

Stellina tramples guy before getting laid

Mistress Stellina knew that to get this guy to do what she wanted, she had to do it before she laid him. So she undressed and remained with her bra and underwear then trampled him. She told him she likes macho guys and he pretended to be one. She used her high heels to trample then followed it up with her bare feet. The guy endured it all praying for her to be done and him getting to screw her.

Vanessa loves to dance. She loves it so much that she wanted to try dancing on a different surface. She thought about it and realized she had never danced on a human body before. So she called her slave and made him lie down. She was wearing her shoes as she got on top of him and started dancing on him. It was painful to him but it was fun to her. 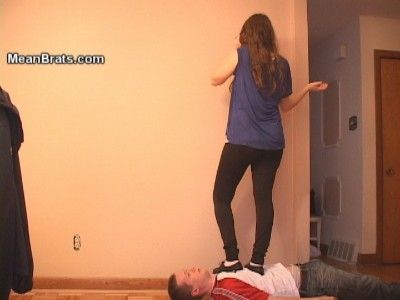 Mistress Emily toughens up her slave

Mistress Emily wanted to toughen her slave. She did not want to have a slave who was a sissy and a weakling. So she made him lie down on his bed and she came only wearing her underwear and a t-shirt. She then trampled him with her bare feet before continuing with her high heels to increase the pain. He had to endure the pain or else he would have been given more.

Mistresses do not come as cruel as this one is. She has the most fun when a slave is being humiliated and degraded. This is especially true when she is the one doing the trampling. But today was not her day. She was showing other mistresses how to enjoy themselves while at the same time humiliating their slaves. She showed them how to do it and after a few they were airborne in SIngapore